If waste load contains fine material then the guidance under the ‘Qualifying fines’ heading also applies.

Then the whole load may be taxable at lower rate. Any load which is hazardous waste as defined by Directive 2008/98/EC (see SLfT2004) must, however, be taxed at the standard rate.

Material of a standard taxable rate must not be added to material of a lower rate. For example, it must not have been deliberately or artificially blended or added to the qualifying material(s) after or in connection with removal from its original site. Such an addition would make the entire load taxable at the standard rate. The only exceptions to this are when;

In cases of doubt the waste will be taxed at the standard rate unless you can demonstrate that the waste qualifies for the lower rate of tax and that all reasonable and practical measures have been taken to remove contaminants contained within the waste.

For example, we would accept the following as qualifying for the lower rate:

It is not possible for us to advise you on every disposal. It is your responsibility to decide whether a particular load disposed of at your site contains any standard-rated material.

If it does contain such waste you need to satisfy yourself that the load:

Note: From 1 April 2015, and under a direction made under section 14 of the LT(S)A 2014, we will require you to use the following flowchart in order to determine whether a waste load containing fine material is chargeable at the standard or lower rate.

For SLfT purposes, fines are particles produced by a waste treatment process that involves an element of mechanical treatment. 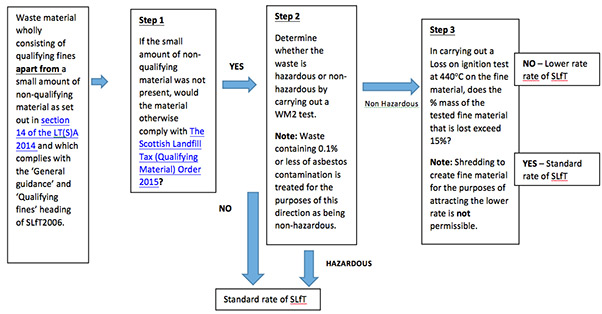