View Annual Summary of Trends in the Devolved Taxes.

Scottish Landfill Tax (SLfT) is a tax on the disposal of waste to a landfill in Scotland, whether or not to an authorised landfill site. SLfT applies to all taxable disposals made in Scotland on or after 1 April 2015.

SLfT also applies to the prescribed landfill activities relating to the use of material on site that are listed in the Scottish Landfill Tax (Prescribed Landfill Site Activities) Order 2014.

For more information about SLfT, please see the relevant sections on our website.

Standard rate disposals of 1.17 million tonnes were declared in 2020/21, a decrease of 13 per cent on the previous year, and a continuation of the long-term trend of gradually declining disposals.

During April to June 2020, standard rate disposals were 41 per cent lower than the same period of the 2019, significantly faster than the long-term trend of reducing tonnages, due to disruption resulting from the COVID-19 pandemic and restrictions. However, higher disposals in the following three quarters of the year compensated to some extent for this decrease.

1. For 2015/16 and 2016/17 this column will not equal the sum of the previous two columns. This is because of a small number of operators who have not reported the tonnages associated with taxable disposals subject to a partial water discount. The disposals were included in the gross SLfT declared due and, therefore, do not have any tax implications.
2. Taxpayers can claim a credit equal to 90 percent of their contribution to the SLCF.
3. Credit claimed for bad debt and permanent removals 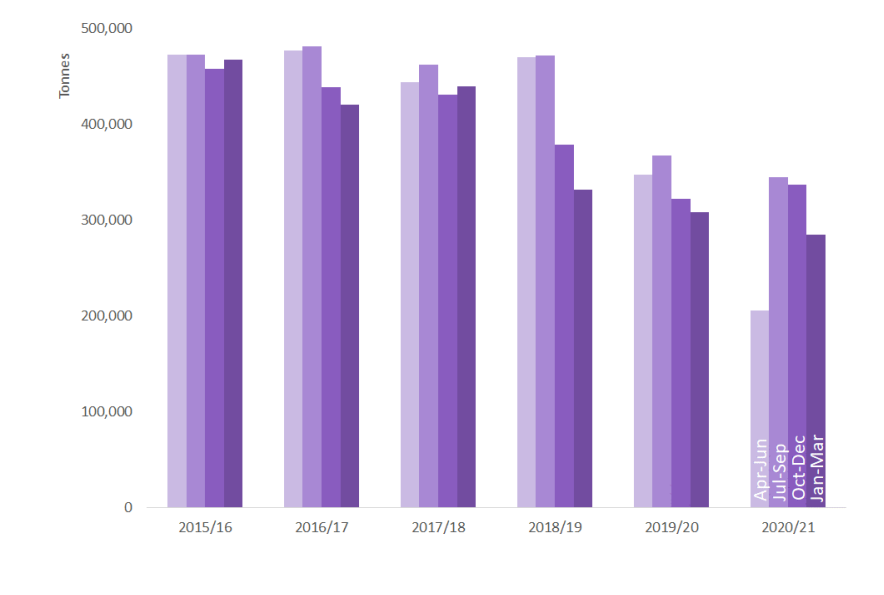 Figure 28: SLfT declared due by quarter

Figure 27 shows declared standard rate disposal tonnages by quarter and year and Figure 28 shows the (net) SLfT declared due by quarter and year. Figure 27 shows that the standard rate disposal tonnages declared in April to June and July to September tend to be slightly higher than in October to December and January to March. April to June 2020 provided an exception to this trend as waste disposals were disrupted by impacts of the COVID-19 pandemic. 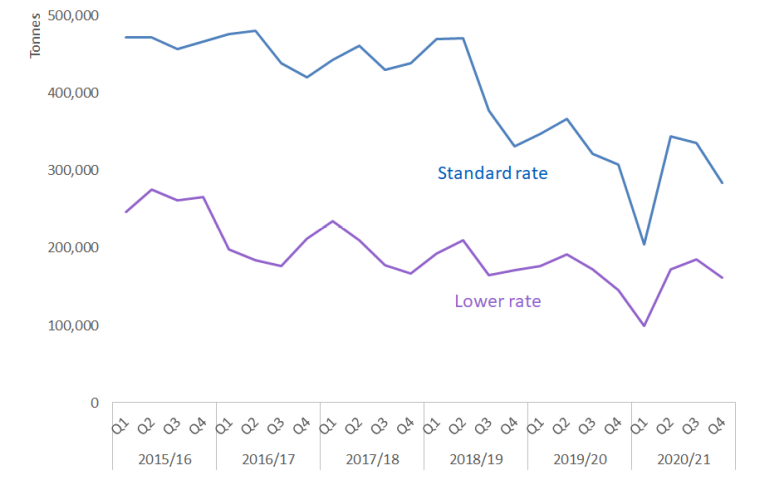 Figure 29 shows declared taxable disposals by SLfT rate and quarter. In addition to the seasonality discussed above, Figure 29 shows a gradual downward trend in standard and lower rate disposals up to and including 2018/19-Q2, followed by a more marked decrease in the level of standard rate disposals from 2018/19-Q3 onwards. A clear dip is seen in Q1 2020/21 and this is likely to reflect the impact of COVID restrictions.

Table 14: Proportion of gross SLfT declared due by EWC code and year

Note that as EWC code 19 12 12 constitutes waste “from the mechanical treatment of waste” then it will contain other waste types (i.e. other EWC codes) that have then been mechanically treated.

Further information on determining the amount of SLfT tax payable (e.g. higher or lower rate) is contained in guidance published by Revenue Scotland.

16 Taxpayers can claim a credit of 90 per cent of their contribution to the SLCF which is then deducted from their gross SLfT liability.