The report gives an outline of our key business activities and performance over the past financial year. 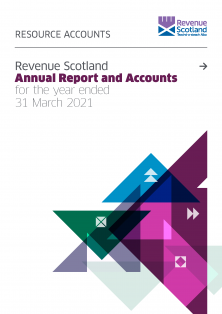 Statement of Changes in Taxpayers’ Equity

The Notes to the Accounts form part of these financial statements.

Notes to the Accounts

In line with section 12 of the Revenue Scotland and Tax Powers Act 2014, and in accordance with the accounts direction issued by the Scottish ministers under section 19(4) of the Public Finance and Accountability (Scotland) Act 2000, these financial statements have been prepared in accordance with the 2019-20 Government Financial Reporting Manual (FReM) issued by HM Treasury. The accounting policies contained in the FReM apply International Financial Reporting Standards (IFRS) as adapted or interpreted for the public sector context. The particular policies adopted are described below. They have been applied consistently in dealing with items that are considered material to the accounts.

The accounts are prepared using accounting policies, and where necessary, estimation techniques which are judged to be most appropriate to the particular circumstances for the purpose of giving a true and fair view in accordance with the principles set out in International Accounting Standards (IAS) 8 Accounting Policies, Changing in Accounting Estimates and Errors.

In accordance with the FReM these accounts have been prepared under the historical cost convention and on a going concern basis, which provides that the organisation will continue in operational existence for the foreseeable future.

The accounts have been prepared in accordance with the historical cost convention modified to account for fair value of non-current assets. Expenditure has been accounted for on an accruals basis.

In accordance with IAS 8, changes to International Financial Reporting Standards (IFRS) that have been issued but not yet effective have been reviewed for impact on the financial statements in the period of initial application. The standards that are considered relevant to Revenue Scotland and the anticipated impact on the accounts are as follows:

We previously reported that this standard was due to come into effect for accounting periods commencing after 1 April 2020. However HM Treasury agreed with the Financial Reporting Advisory Board (FRAB) to defer the implementation of this standard until 1 April 2021 due to circumstances caused by COVID-19. When implemented the distinction between finance and operating leases is removed and all leases become "on balance sheet". The FReM interprets and adapts IFRS 16 for the public sector context in several ways. Information is currently being gathered to identify all right of use and leased assets not currently capitalised. The full impact has not yet been determined. These assets will be included on the statement of financial position from 1 April 2021, in accordance with the transition arrangements set out in IFRS 16 application guidance originally issued by HM Treasury in April 2019 and updated in March 2020.

Revenue Scotland is registered for VAT as part of the Scottish Government VAT group registration which is responsible for recovering VAT on behalf of Revenue Scotland.

Revenue Scotland does not provide any chargeable services and therefore output VAT does not apply. Irrecoverable input VAT is charged to the relevant expenditure category. Where VAT is recoverable, the amounts are stated net of VAT.

All property, plant, equipment and intangible assets are accounted for as non-current assets unless they are deemed to be held for sale.

Minor expenditure on equipment and furniture are written off in the year of purchase, as are all other items of a capital nature costing less than £10,000.

Assets under development are shown separately in note 5. Costs are accumulated until the assets is brought into use whereupon it is transferred into the relevant asset class and depreciated.

Where staff have been working on the development, integration and testing of IT software, these costs are included in the amounts capitalised.

Provision for depreciation and amortisation is made so as to write off the cost of non-current assets on a straight line basis over the expected useful lives of the assets concerned. The expected useful lives of assets are regularly and systematically reviewed to ensure that they genuinely reflect the actual replacement cycle of all assets. Depreciation and amortisation are not charged on assets in the course of development until the month after they are brought into use.

The expected useful lives are as follows:

Depreciated and amortised historical cost is used as a proxy for fair value since the assets are low value and have short useful lives.

Operating leases are charged to the Statement of Comprehensive Net Expenditure on a straight line basis over the term of the lease.

Revenue Scotland employees are civil servants who are entitled to be members of the Civil Servant and Others Pension Scheme or the Principal Civil Service Pension Scheme. These are unfunded, multi-employer defined benefit schemes in which Revenue Scotland is unable to identify its share of the underlying assets and liabilities. The schemes are accounted for as defined contribution schemes under the multi-employer exemption permitted in IAS 19 Employee Benefits.

Revenue Scotland's contribution is recognised as a cost in the year.

The cost of annual leave and flexible working time entitlement earned but not taken by employees at the end of the year is recognised as an accrual of benefits in the financial statements to the extent that employees are permitted to carry forward leave into the following year.

Other receivables are stated at their nominal value.

1.11 Trade and other payables

Trade payables are stated at their nominal value.

1.12 Provisions for liabilities and charges

A provision is recognised where an outflow of resources is expected as a result of a past event. These are included within the accounts at the estimated value.

During 2020-21 staff were seconded to Scottish Government and the associated staff costs were recharged accordingly. More details on staff numbers and related costs can be found in the Staff Report.

Revenues Scotland's goods and services costs have been allocated as follows:

(1) In the interests of efficiency, effectiveness and economy, Revenue Scotland and the Scottish Ministers are committed to identifying opportunities for shared services. The amount represents costs charged by the Scottish Government for the following functions:

(2) Delegated duties represents the amounts payable to Registers of Scotland and the Scottish Environment Protection Agency in relation to the duties delegated to them under the Revenue Scotland and Tax Powers Act 2014.

7. Trade and other payables

8. Provision for liabilities and charges

This provision relates to the potential reimbursement of taxpayers’ legal fees incurred in preparation for tribunal hearings where Revenue Scotland withdrew their opposition. The amounts provided in 2019-20 have either been settled during 2020-21 or agreement reached to settle and been included within accruals as an event after the reporting period.

In line with the RSTPA, Section 2, Revenue Scotland has delegated some of its functions relating to SLfT to the Scottish Environment Protection Agency (SEPA).

Functions related to LBTT were delegated to Registers of Scotland (RoS) until July 2019 when these functions were brought in-house.

None of the board members, key managerial staff or other related parties has undertaken any material transactions with Revenue Scotland during the year.

The following charges have been included in the accounts:

Auditor's remuneration is disclosed as a notional charge and relates to fees notified to Revenue Scotland by Audit Scotland in respect of audit work carried out in relation to the year ended 31 March 2021. All audit fees are paid from the Scottish Consolidated Fund.

No non-audit work was carried out by Audit Scotland during the year ended 31 March 2021.

Total future minimum payments under contractual commitments are given in the tables below for each of the following periods:

The amounts above are in relation to the contracts for the provision of Revenue Scotland’s tax and finance systems. The contract for the original SETS tax system expired in August 2019. The new system went live in July 2019 and the contract will expire in 2029. The contract for the finance system was renewed in December 2020 for one year with an option to extend for one further year. Amounts charged in 2020-21 of £317,000 (2019-20: £325,000) are included within computer and telephone costs in note 3 above.

The above amount is in relation to developments to the tax system agreed prior to March 2021.

12. Events after the reporting period

A provision was included in the 2019-20 financial statements in respect of liability for taxpayer expenses. After the end of the reporting period the liability was determined and the estimated amount concerned has therefore been treated as an adjusting event and transferred to other accruals.