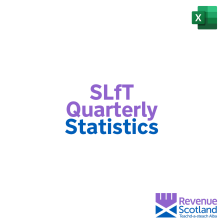 £32.5 million in Scottish Landfill Tax (SLfT) was declared payable for the latest quarter, April to June 2021.

Total SLfT declared due and tonnes of taxable waste disposed have gradually declined year on year since SLfT was introduced in 2015, while the standard rate of tax has increased by 2-3 per cent each year. This decline became steeper from the third quarter of 2018-19 (October to December 2018) onwards, although it has flattened off recently.

Typically, more taxable waste is declared for April to September each year than for October to March. 2020 broke this pattern: April to June 2020 saw unusually low taxable disposals (40 per cent less SLfT declared due than the same quarter of the previous year), during the first UK-wide lockdown of the COVID-19 pandemic. Similar patterns were seen for other parts of the UK. From July to December 2020, SLfT declared due returned to a slightly higher level than the same two quarters of the previous year.  It is difficult to separate out the impact of the COVID-19 pandemic on SLfT from the underlying trend, but the large drop in revenue in Q1 2020-21 (and subsequent recovery in later quarters) is likely to have been strongly affected by COVID-19 restrictions.

Note - to make the information in this publication more accessible to users, charts and additional commentary have been added, as well as some formatting changes (for example, to support the use of assistive technology such as screen reader software). If you have any comments regarding these changes or the overall publication, please contact us at: statistics@revenue.scot